PETALING JAYA: After the historic defeat in the 2018 General Election, Umno and its bitter foe PAS inked a charter of cooperation called Muafakat Nasional to fight the common enemy – Pakatan Harapan.

It was signed with much pomp by PAS president Tan Sri Abdul Hadi Awang and his Umno counterpart Datuk Seri Dr Ahmad Zahid Hamidi with a rally in Kuala Lumpur on Sept 14, 2019.

Three years on, it looks as if Muafakat Nasional has reached the end of the road.

The former political foes turned allies are not likely to continue their alliance into the 15th General Election (GE15), say political analysts.

He said Ahmad Zahid’s recent statements that PAS was always playing safe and “bathing in several ponds” were hints that Umno was firm in its stance not to work with the Islamist party.

“This is because Umno is firm in rejecting Parti Pribumi Bersatu Malaysia and Perikatan Nasional.

“Umno now feels it can face the general election without PAS,” he said.

Citing the results from the Malacca and Johor state elections, Hisomuddin said Umno, which leads the Barsian Nasional coalition, was able to form strong governments without PAS which worked with Bersatu.

He said it was now PAS that is still holding on to hopes of convincing Umno to work together.

“Clearly PAS’ narrative about the unity of ummah can no longer be used to convince Umno. In my view, Muafakat no longer has meaning,” he said.

“Look at the states under the administration of PAS and Umno. All of them do not uphold the spirit of Muafakat.

“Muafakat only remains as a name, everything is long gone,” he added.

Universiti Sains Malaysia senior lecturer Dr Azmil Mohd Tayeb also felt the two parties would not get together for GE15.

“(There’s) too much bad blood between them. Plus, PAS is working with Bersatu and working with Umno would mean betraying its Perikatan ally,” he said.

Dr Oh Ei Sun, a senior fellow at the Singapore Institute of International Affairs said Umno was quite confident it could stand on its own to take on both Perikatan and Pakatan.

“Umno senses that there has been a huge flow of Malay voters back to its fold, as was evident in both the Melaka and Johor state elections,” he said.

“PAS, on the other hand, is obviously not so confident and has thus been wooing Umno, even at the expense of its working relationship with Bersatu. PAS hopes to reach some sort of electoral accommodation with Umno so the two parties do not clash,” he added.

Meanwhile, Dr Tunku Mohar Tunku Mohd Mokhtar of the International Islamic University Malaysia (IIUM) said there are segments within Umno and PAS who wants Muafakat to be revived.

“They know that contesting against each other would harm their chances in some marginal seats. However, most Umno top leaders would not want to work with a party which is also in cahoots with Bersatu, which they consider to be Umno’s splinter group,” he said.

“If PAS decides to end its cooperation with Perikatan, Umno may reconsider having an electoral pact with PAS. As it is, Muafakat is dead. Umno’s position is very clear regarding cooperation with Bersatu.”Tunku Mohar, however, noted that an alliance was still likely in the event of a hung parliament. PAS may have to re-strategise and change its alignment, thus paving way for a post-election coalition.

“For now, though, I think Umno would prefer to go it alone based on its reading of voters’ preference in the two state elections,” he noted.

PAS vice-president Datuk Seri Dr Ahmad Samsuri Mokhtar reportedly said yesterday that leaders in Muafakat must cast aside their ego and try to reach a consensus.

Umno deputy president Datuk Seri Mohamad Hasan, meanwhile, said any review of the decision not to work with PAS could only be made by the Umno supreme council. 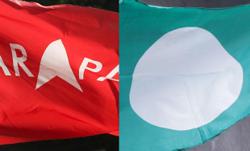