IPOH: A 16-year-old boy was found drowned at the Batu Berangkai waterfall in Kampar.

“The teacher and the three boys were from Batu Gajah and went to the waterfall for recreational purposes.

“They arrived around 11.30am and upon arrival, Lukman Hakim was the first to jump in while the other three were carrying items from the car.

“According to our initial investigation, he was last seen in the middle of the waterfall before suddenly disappearing. His teacher tried to call him a few times and his friend went into the water to find him but failed,” he said adding that a nearby villager later found and carried the body out.

“The waterfall has been deemed as a risky site where casualties have been reported a couple of times. No one else was at the site besides the four of them. When the incident occur, the teacher sought villagers’ help and called the emergency line.

“Based on the early inspection of the victim’s body, we believed that he died due to drowning. The body has been sent to Kampar Hospital for post-mortem to be conducted,” he said. 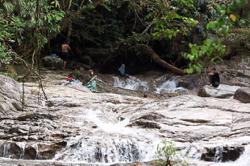