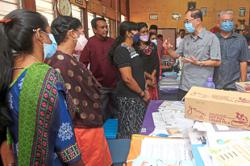 TAMPIN: Pupils of SJKT Ladang Regent in Gemencheh near here can finally move into their new school built more than five years ago after getting the go-ahead from the Education Ministry.

Deputy Education Minister Datuk Dr Mah Hang Soon was the bearer of good news when he turned up for a visit at the 88-year-old old school and then proceeded to the new building a short distance away to hand over the certificate of practical completion (CPC) to headmistress P Navaneetham.

"Since I was made deputy minister in 2020, my team has had five meetings with the relevant parties to find ways to expedite the CPC approval for the school.

"In fact, I had sent six memos each time asking for the latest status and when the school will be ready," he said after a tour of the school on Friday (Aug 19).

Dr Mah said the construction of the RM8.5mil school started in August 2014 and was completed two years later.

However, the handover was delayed due to problems such as the need for a new access road and water supply and the ensuing movement control order during the Covid-19 pandemic.

The Tampin District Council issued the CPC in February last year while the Education Ministry's CPC was approved on Aug 8.

"It is my hope that the pupils will benefit from the more conducive learning environment.

"Once we issue the school code, they can move here," he said.

Dr Mah said the ministry has also issued a CPC to four other schools recently.

Navaneetham, who has been the SJKT Ladang Regent headmistress for more than 10 years, said the staff and pupils were looking forward to moving into the new school.

The school currently has 251 pupils.

She said apart from termite problems, the old school building had also been affected by floods.

"We also worry about the safety of the pupils as we have often encountered snakes in the old school," she said.

Navaneetham was also happy that the new school would be able to accommodate more pupils.

"At present, we have to share some classrooms due to lack of space.

"This would not be a problem in the new school," she said.

State MIC chief Datuk L. Manickam said he had also asked for Dr Mah's help to expedite the awarding of the CPC to SJKT Ladang Saga in Rantau and SKJT Ladang Simpang Pertang in Jelebu.

"The construction of both schools was completed several years ago but they have yet to be opened due to various problems.

"Dr Mah has promised to resolve these and we can expect the CPC to be given within three to six months," he added. 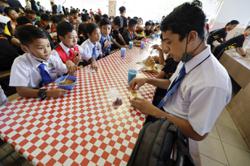