The Human Resources Minister said the scheme to cover homemakers against injuries suffered while tending to their chores would be managed by the Social Security Organisation (Socso).

For now, it only provides coverage for housewives, he added.

‘’I call on all husbands and fathers to come forward, sign up and start contributing. This is to show their love and that they care,’’ he said in a press conference here yesterday.

On July 26, the Dewan Rakyat passed the Housewives Social Security Bill (HSS), which allows husbands to voluntarily contribute to the scheme for their wives below the age of 55.

The scheme offers insurance coverage of between RM300 and RM50,000, depending on the seriousness of the injuries sustained.

Asked if the definition of housewife would be widened to cover husbands who assume the role of homemakers as well, Saravanan said the ministry would need an in-depth study to see the number of house husbands involved.

“If the need arises, the ministry has no problem to extend the coverage for male homemakers too,’’ he said.

Saravanan said the HSS scheme is voluntary and husbands are not compelled to make contributions for their wives.

“No action would be taken against any husband who did not contribute.”

However, he noted that husbands who have signed up to contribute and failed to maintain it monthly would be fined RM10,000.

“Those who have signed up and face problems to contribute later on can discuss or file an application with Socso.

“For example, maybe they have lost their source of income or a divorce took place, then they can come forward within 60 days to be exempted,” he said.

“This will improve social security coverage and workers’ protection,” he said, adding that a worker’s highest and lowest contribution was RM7 and 70 sen a month.

With the ceiling limit not changed since 2016, he said these amendments would see workers receiving wider protection and benefits, especially when the cost of living has gone up. 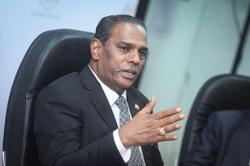