JOHOR BARU: Barisan Nasional aims to make Johor its fortress once more by setting a target of winning 20 out of 26 parliamentary seats in the 15th General Election (GE15).

Barisan deputy chairman Datuk Seri Mohamad Hasan (pic) said the coalition's priority in the election was to win where it had set a high target for Johor Barisan.

“At least 20 parliamentary seats from Johor will become a main contributor in our effort to form a Barisan government at the Federal level.

“This is a very tall order and a heavy task for Johor but we are hoping it can deliver 20 out of 26 parliamentary seats,” he said when met before chairing the state Barisan coordinating meeting at Johor Umno headquarters here on Thursday (Aug 18).

He added that during the state elections in March, Barisan was given a good mandate from the people for which he thanked voters.

Mohamad, however, said that Barisan’s preparations in Johor for GE15 needed to be thorough as it would be different from the state election.

“During the state election, the Barisan family from all over the country came down to help, but this time around, they must take care of and manage the respective areas on their own.

“That is why our level of preparedness needs to be improved, it needs to be stronger and it needs to be more stable because there are no friends from all over the country to help,” he added. 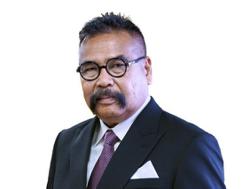