All calm here: The water level at the Batu Dam in Ulu Yam following unexpected weather in the Klang Valley. — FAIHAN GHANI/The Star

PETALING JAYA: Hot as it is, the rain still pours and dams serving even highly populated states are at satisfactory and sufficient levels.

But authorities in states like Penang and Johor still caution the population as a few dams there are below satisfactory levels, no thanks to the erratic La Nina (Little Sister) weather phenomenon.

The National Water Service Commission (SPAN) said that as of yesterday, all dams in Selangor, Perlis, Kedah and Melaka recorded levels of above 90%.

SPAN corporate communication and consumer affairs director Mohd Fazil Ismail said water operators in all states had been asked to monitor the water level of the dams and rivers daily.

“This is to ensure that early action can be taken to deal with any possible disruption of water supply in the future.

“Currently, most of the main water treatment plants have an alternative source of water supply, which is through the Sungai Water Bank Reservoir that stores excess water during high water flow and is used when the river water flow is low,” he said.

Mohd Fazil advised users to be prudent with their water usage, adding: “Avoid wastage so that available water sources will last longer.”

Checks on Environment and Water Ministry’s web portal, publicinfobanjir, showed that dams in a few states were above the normal range and even nearing the alert level.

But dry weather is coming.

The average temperature nationwide is between 32°C and 34°C but in some places, the maximum temperature can reach 36°C.

“The current temperature is normal. This situation is normal. It does not rain for several days in some places, so the surface of the earth will become dry and the temperature will rise,” he said yesterday.

Muhammad Helmi said climate change as a result of global warming increased the potential for extreme or erratic weather not only in Malaysia but throughout the world.

He added that small-scale extreme weather was difficult to predict due to its short duration and localised nature.

There was also no technology or modelling capable of predicting such extreme weather events, he said.

London and California too hot even for sun-loving Malaysians 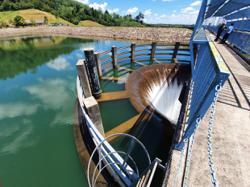