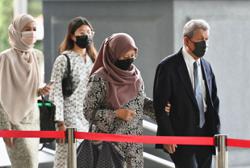 KUALA LUMPUR: Former Navy chief Tan Sri Ahmad Ramli Mohd Nor, who has been hit with three criminal breach of trust charges involving RM21.08mil, remained defiant that he was innocent, with his lawyer saying he would “defend himself with the truth”.

The 78-year-old former managing director of Boustead Naval Shipyard Sdn Bhd (BNS) walked slowly into the court looking rather frail, accompanied by his wife and two others believed to be his daughters.

When the interpreter at the Sessions Court read out the three charges, he said: “I understand; I plead not guilty and ask to be tried.”

He arrived at the court complex at 7.50am, clad in a white shirt and black suit paired with a bluish grey tie.

Members of the media were already there, as he made his way slowly to the courtroom, where his case began at about 9.15am.

For the first offence, Ahmad Ramli was charged with approving payments of RM21.08mil in his capacity without the agreement of the company’s board of directors.

According to the charge sheet, he allegedly approved RM13,541,140 to Setaria Holdings Limited’s Singapore bank account without BNS board approval between July 26, 2010 and March 25, 2011.

In the second charge, he was alleged to have approved RM1,360,716 as payment to JSD Corporation Pte Ltd Singapore bank account without BNS board approval between April 19, 2011 and May 4, 2011.

In the third charge, Ahmad Ramli was alleged to have approved another payment of RM6,182,295 to Sousmarin Armada Ltd Singapore bank account without BNS board approval between Oct 28, 2010 and Nov 22, 2010.

All three offences, under Section 409 of the Penal Code for criminal breach of trust by a public servant, occurred at the Boustead Naval Shipyard Sdn Bhd at Menara Boustead, Jalan Raja Chulan here. Ahmad Ramli faces a jail term of between two and 20 years, with whipping and also a fine.

He also asked that the accused’s passport be held by the court.

“We also want to propose a later date for mention on Nov 24 because we were informed by the defence of their intention to submit a representation to the Attorney General’s Chambers,” Wan Shaharuddin said.

Mohd Yusof confirmed and said the representation was to review the case.

Judge Suzana Hussain then allowed bail at RM500,000 in one surety with RM200,000 cash collateral.

The court also ordered Ahmad Ramli to surrender his passport. He posted bail.

The case was set for mention on Nov 24.

BNS is the main contractor in the long delayed RM9bil littoral combat ships (LCS) project to deliver six navy frigates to the government. The first ship had been scheduled for delivery in 2019, followed by the others at six-month intervals. None of them has been delivered.