"At the championship, the victim who was from Chumpong, Thailand, had lost to a Malaysian muay thai boxer, aged 29, from the Kuala Lumpur Red Army Club.

"The unconscious victim was first brought to the Badang Health Clinic about 1am yesterday, but was then rushed to the emergency unit of HRPZ II and he died there yesterday morning," he said at a media conference held at the state police contingent headquarters, here on Sunday (Aug 14).

Muhamad Zaki said the deceased, who was married and had a child, was then taken to the Rantau Panjang Immigration, Customs, Quarantine and Security (ICQS) Complex at 8pm yesterday to be handed over to his next of kin.

"Based on the investigation, the deceased had entered Malaysia legally and had a valid travel document.

"Police have also recorded statements from the organisers of the muay thai championship on the case and found that they had a permit to hold the event,” he added. - Bernama 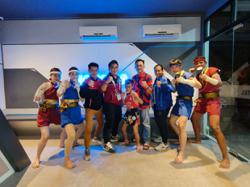