In a Facebook post, he said he had contacted the Home Ministry urging that further investigations be carried out once the said person is back in Malaysia.

"I am concerned over the viral news that a woman performed umrah in the garment worn by male pilgrims while in a state of ihram, this is a religious issue and action will be taken," he said.

Idris said the Tourism, Arts and Culture Ministry has also been told to check on the tour agency which had dealt with the individual concerned, and to take action if the matter is found to be true.

A 17-second video shared on Twitter Friday (Aug 12) showed a woman said to be a Malaysian, dressed in male ihram clothing in the holy land, which received various reactions from netizens. - Bernama 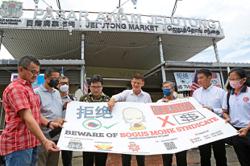