National Day: 600 students to do formation performance at Merdeka Square 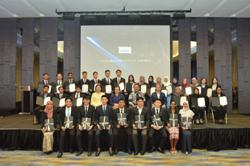 SHAH ALAM: After two years of not seeing the usual colourful performances on National Day due to the Covid-19 pandemic, this year’s celebration will be much awaited by Malaysians as they will get to enjoy the excitement of various events at Dataran Merdeka on Aug 31.

One of them is a formation performance using flags by 600 students from 24 schools in Selangor.

The students will start their performance by forming the 2022 National Day and Malaysia Day logo, which was designed by incorporating the wifi signal icon.

The performance, which will also include the use of flags, will be accompanied by music from songs, such as "Derap Komando’ by Search and "Seiring Sejalan", a popular song by the late Datuk Sharifah Aini and Broery.

Selangor Education Department deputy director of Students’ Development Sector, Yasmin Kamarudin said the formation with the flag performance could be considered one of the main shows on Aug 31.

"The students will perform four types of movements, including on the formation of the logo, flag movement formation to the beat of old and new songs that are specially composed by the National Arts and Culture Department (JKKN) for the seven-minute performance.

"The students will be clad in a special costume, with the theme Jalur Gemilang.

"They will be divided into two groups with 300 of them carrying small flags, while the rest will perform a 'colour guard' performance using larger flags," she told Bernama.

Yasmin said the Selangor Education Department had been task with the field performances for the National Day celebration since 2014 with the number of students taking part reaching to thousands.

"Actually, the more the students, the more beautiful is the performance,” she said.

However, for this year’s performance, the number of students taking part has been reduced to only 600 due to Covid-19, she added.

She said the students started training last July 18 and most of them had mastered the pace of movement and the use of the equipment for the performance.

According to the Communications and Multimedia Ministry, there are three main highlights to enliven the National Month celebration, which includes the launch of the National Month and the Fly the Jalur Gemilang, held last July 30 in Putrajaya.

The other two highlights are the National Day Celebration on Aug 31 at Dataran Merdeka, Kuala Lumpur, while the Malaysia Day Celebration will be held on Sept 16 in Melaka. - Bernama