He said the situation is still under control and so far, there have been no reported deaths in the state due to the disease.

"We have to make sure these workers undergo a health screening before starting work.

"Most of the malaria cases were brought in from Africa, so health screening is very important so that we can identify it from an early stage," he told reporters after the launching of the Johor-level Healthy Malaysia National Agenda (ANMS) tour in Bandar Dato’ Onn here Friday (Aug 12).

The event was launched by Health Minister Khairy Jamaluddin.

Asked on the newly identified Langya virus in China with dozens of cases recorded so far, Dr Noor Hisham said the ministry is now closely monitoring the development of the situation. - Bernama 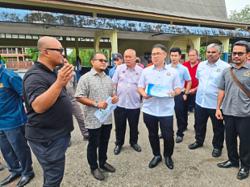