KOTA KINABALU: Parti Warisan is not committing to potential cooperation with Parti Sarawak Bersatu (PSB) although admitting it will not close its doors to the possibility of working with suitable partners for the coming 15th general election (GE15).

This was after the local Sarawak opposition party reached a stalemate with DAP on seat negotiations for the coming general polls.

Warisan vice-president Datuk Junz Wong (pic) said his party has so far been clear and consistent in its stance over their political direction.

"We have never responded to that (possible cooperation with PSB)," Junz said when contacted on Thursday (Aug 11).

"At this moment we want to build our house and the only people we want to work with is Parti Bersatu Sabah (PBS) in Sabah.

"So, we will have to wait and see for the rest. We don’t close the door but we don’t want to promise anything either," the Tanjung Aru assemblyman added.

Seat negotiations between DAP and PSB for the coming general election had hit a brick wall after PSB's demand to contest in one of the seats held by DAP.

Sarawak DAP chairman Chong Chieng Jen had said on Monday (Aug 8) that the negotiations should only involve the seats not won by the Opposition in the last polls, while the seats currently held by both parties were off limits.

Last March, PSB president Datuk Seri Wong Soon Koh was reported to have said his party and Warisan had agreed to work together to form the Borneo Alliance, which is a coalition of Sabah and Sarawak opposition parties.

Wong said, however, there was no date set to formalise the pact.

In response, Junz at the time chose not to confirm or deny the report but said anyone from Sabah or Sarawak had no issues working together for the Borneo agenda.

Meanwhile, speaking on Thursday (Aug 11), Junz said Warisan, a national Opposition party, did not intend to "disturb" the political soup in Sarawak.

He said Warisan instead wanted to work with Sarawak parties to form the Federal Government after GE15.

He added the unity among local parties in Sarawak was what Sabah aspired to achieve.

"What Sarawakians have achieved is exactly what Sabah is going for, so why should we go and disturb Sarawak?

"Our stand is that for the coming general election, we want to work with the Sarawak government to form the Federal government because we (Warisan) want to be the kingmaker," said Junz. 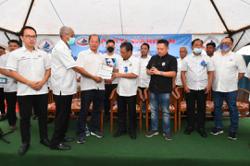