Facing the law: A businessman and a recruitment agency owner are the latest to be arrested by the MACC over bribe allegations linked to helping employers or agents get quotas for foreign workers.

PETALING JAYA: Two more arrests were made by the Malaysian Anti-Corruption Commission (MACC) over bribe allegations linked to helping employers or agents get quotas for foreign workers.

The arrests come after eight were nabbed by MACC on Tuesday night.

They included an information technology company’s chief executive officer and a senior official of the firm.

The latest two detained were a businessman and an employment agency owner, both aged between 30 and 50.

They were arrested at 10pm and midnight on Wednesday at the MACC headquarters in Putrajaya.

“The businessman was investigated in relation to receiving bribes amounting to more than RM1mil from an employment agent, while the other is suspected of paying bribes to a company providing a platform for foreign workers’ applications,” a source said.

Magistrate Irza Zulaikha Rohanuddin allowed both suspects to be remanded for four days beginning yesterday and ending on Sunday.

Of the eight arrested earlier, six were remanded for three days until today.

The other two – a man and a woman – were released on bail after their statements were recorded.

MACC director of investigations Datuk Seri Hishamuddin Hashim had on Wednesday confirmed the remand and said the case was being investigated under Section 16 (a) of the MACC Act 2009.

It was reported that the graft busters raided the company last month.

Meanwhile, IT solution provider Bestinet, responding to recent news on the investigation of its employees by MACC, said it was not in a position to comment on ongoing investigations.

“Bestinet upholds very strict governance regarding business ethics and integrity and practises a zero-tolerance policy towards bribery and corruption in all its forms.

“As such, the company places high importance on accountability and transparency in the conduct of its business activity at all times and is fully committed to acting as a positive force in all markets it operates in,” it said in a statement yesterday.

Bestinet is an IT system provider that supplies the Foreign Workers Centralised Management System in Malaysia. 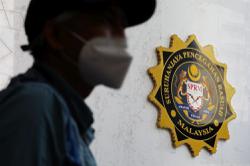