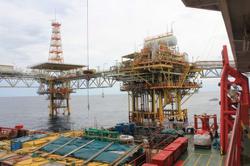 KOTA KINABALU: Sabah has sent a clear message to oil and gas companies operating in the state that Sabahans should be given first priority for work in the industry following raids on two offshore facilities this week.

He said the Immigration Department was enforcing a directive and policy by the Sabah government to ascertain that all offshore workers had valid permits to work in the state.

“This is also in line with the state government’s ‘Sabah First’ policy so that Sabahans are given first priority in the recruitment of workers in the oil and gas industry, especially at all offshore production facilities in Sabah waters,” he said when contacted yesterday.

“Offshore contractors must apply for work passes for all their non-Sabahan staff or workers.”

Masidi said the Chief Minister’s Department (CMD) would consider every work pass application and approve only those positions where no qualified Sabahans were available to do the job.

“The CMD is continuously updating its database of technically qualified Sabahans to be offered to oil and gas contractors to hire if and whenever needed.

“PETRONAS has also agreed to assist the state in the training and upscaling of Sabahans in the industry,” he added.

In a statement, Sabah Immigration director Sitti Saleha Habib Yussof said they screened 311 workers in the 10am operation carried out at two oil platforms off northern Sabah.

She said 307 of those checked consisted of Malaysians while the rest comprised three Myanmar nationals and one Indonesian.

“No arrest was made. The companies operating the facilities as well as offshore crew heeded the rules on work permits set by the Sabah government.

“They gave their full cooperation to us during the course of the documentation process,” she said.

“Such operations will be continuously carried out with the state government as well as the Ports and Harbour Department,” she added.

Last month, Masidi told the state assembly that the state government would prioritise Sabahans in terms of working opportunities in the oil and gas sector.

He said the state had a rigid system for non-Sabahans to apply for work permits in the industry.