‘He had mental health issues’ 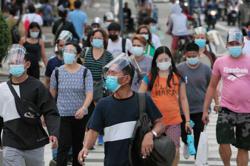 KUALA LUMPUR: The Myanmar man who threw his children off an elevated highway before falling to his death himself had threatened to take his life many times prior to the incident, say police.

Sentul OCPD Asst Comm Beh Eng Lai said police managed to track down the man’s wife, a 28-year-old Myanmar, who came to the police headquarters on Tuesday to have her statement recorded.

ALSO READ: Man who threw kids off MRR2 had threatened to take his life, say cops

“She claimed that her husband had mental health issues after he was infected with Covid-19 over a year ago.

“She added that he kept to himself and talked to himself,” he said when contacted yesterday. He added that the man also threatened to take his own life several times.

ACP Beh said investigations revealed the man was unemployed and had spent most of his time taking care of his children at home.

“The woman works as a helper at a restaurant in Kepong and only heard about the incident via the media.

“She claimed that she went back to the family home at Kepong at around 10pm and realised her husband and children were nowhere to be found,” he said, adding that she tried to call her husband but could not get through to him.

“The child suffered a broken leg and broken ribs,” he added.

It was reported on Tuesday that the man threw his three children off an elevated highway before falling to his death himself along the Middle Ring Road 2 here. Prior to the tragedy, someone saw the man carrying a child on his back.

The other two youngsters were walking alongside their father, holding his hands. Then he flung them off the highway, near the Desa Jaya traffic light, below the MRR2 Highway within the Kepong area. He jumped shortly after that, falling about 20m to the ground.

Three of them died following the fall – the man, an eight-year-old girl and a boy believed to be around six to seven years old.

Another boy, possibly about five years old, survived the fall. It is believed that he was the child that was being carried on the back and was the first to be thrown off the highway. Apparently, he landed on a grassy patch near the curb of the road.

Anyone with information should contact investigating officer ASP Baldev Singh Gurdial Singh at 012-480 6062 or the Sentul police operations room at 03-4048 2222.

Two Myanmar children and dad die in murder-suicide on MRR2