PETALING JAYA: They have to deal with endless rounds of cooking, cleaning and scrubbing.

And there is always the risk of getting hurt while they are busy with household chores.

“Don’t assume that there are no accidents at home. There’s no guarantee that you won’t be splattered with hot oil while cooking. Or you may accidentally touch a hot pan. You may also slip while cleaning the toilet,” she said.

Qurnisha said the scheme, which is managed via the Social Security Organisation (Socso), was also an indication that work done by housewives was acknowledged and appreciated.

“As housewives, we don’t have any contributions that protect us except for insurance. So, when we have this contribution, it is an advantage for mothers,” she said.

“Since I’m self-employed with no regular income, this scheme is very helpful. It also allows husbands to show concern and take care of their wives’ needs,” the home baker said.

Under the scheme, a husband can choose to contribute for his wife – if he opts to do this, he would need to inform Socso.

Economics and social protection expert Datuk Emeritus Prof Dr Norma Mansor of Universiti Malaya said it was a move in the right direction for the government, through Socso, to come up with social security for housewives.

She encouraged housewives to protect themselves through SKSSR.

Prof Norma said data on Malaysian women labour force participation showed that 45% of women of working age are not in the workforce, but Malaysia’s social protection, prior to SKSSR, is employment-based.

“It means that if you’re not in employment then you’re not covered by any kind of social protection,” she said.

She explained that a good social protection would address two things: coverage (how many people it covers) and adequacy (if the coverage is enough to financially support the insured).

“If the government is contributing and supporting the B40 group, then it would cost the government more if they want to give higher protection or wider coverage.

“What’s important for us in Malaysia is to have wider coverage, which means more people covered by social protection,” she said.

Prof Norma added that the scheme is a good start and can be extended further after its implementation.

“I would encourage housewives to set aside RM10 a month because although the coverage is small, at least there is some kind of coverage against injury and death,” she said.

The proposed Act, he said, covers housewives, whether they are stay-at-home mothers or working and part-time housewives against any accidents, illnesses or incidents resulting in permanent disability or an invalidity that affects their normal duties.

He explained that the payment of contributions to the SKSSR by the housewives or other parties, including husbands, is on a voluntary basis.

“If a housewife opts to be protected from domestic accidents or invalidity, the payment of contributions will apply for a period of 12 consecutive months. The contribution payment of RM120 a year needs to be made before the coverage under the scheme takes effect,” he said.

As for the husband who chooses to contribute for his wife, the concept of “once in, always in” will be applied once he informs Socso. It is mandatory then for him to pay for his wife’s contributions, he said.

“If a husband who chooses to contribute for his wife dies or gets divorced from the wife, the ‘once in, always in’ contributions payment becomes void,” he said.

He added that if a housewife decides to work, be it in formal or informal sectors, the SKSSR coverage still remains and the housewife will continue to be protected when she performs household activities outside her work, until the end of the coverage period.

“This scheme will not be a burden to housewives since it is voluntary. Housewives who cannot afford to contribute and are in the i-Suri category will be covered under this scheme, in which the contributions will be made by the government,” he said. 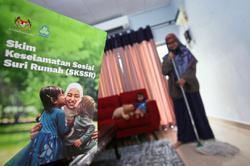