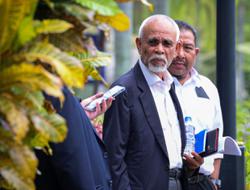 KUALA LUMPUR: The prosecution in the case of Tan Shahrir Ab Samad, who is charged with failing to declare RM1mil which he received from Datuk Seri Najib Razak to the Inland Revenue Board (LHDN), says it will prove that the former Felda chairman was directly involved in money laundering activities when he obtained the money from the former prime minister.

Deputy public prosecutor Mohd ‘Afif Ali said there was oral testimony from prosecution witnesses to prove that the accused (Shahrir) obtained the money which was deposited into his Public Islamic bank account through a cheque dated Nov 27, 2013.

"There is also testimony that the accused did not report his actual income in the Income Tax Return Form for Assessment Year 2013 and this proves that the accused has directly involved himself in a transaction that involves proceeds of an unlawful activity,” he said while reading the prosecution’s opening statement on the first day of the trial before High Court Judge Datuk Muhammad Jamil Hussin.

Shahrir was charged with money laundering by not stating his real income in the Income Tax Return Form, which is a violation of Section 113(1)(a) of the Income Tax Act 1967, on the RM1 million, believed to be from unlawful activities, which he received from Najib.

The cheque was deposited into Shahrir’s Public Islamic Bank account on Nov 28, 2013.

According to Mohd 'Afif, the prosecution would call all relevant witnesses to prove its case against the accused either through direct or indirect evidence.

Shahrir, clad in a black suit, arrived at the Kuala Lumpur Court Complex at about 8.20am. 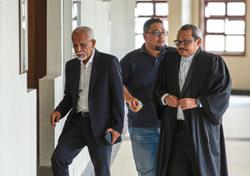