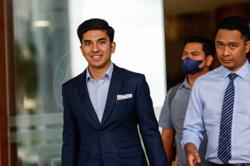 KUALA LUMPUR: The High Court here was told on Monday (July 25) that RM100,000 of the RM120,000 transferred out from the account of Armada Bumi Bersatu Enterprise (ABBE) as instructed by Syed Saddiq Syed Abdul Rahman had not been used for the 14th general election (GE14).

According to the 28th prosecution witness, Syed Saddiq instructed Rafiq Hakim Razali, who was then assistant treasurer of Bersatu’s Angkatan Bersatu Anak Muda (Armada) wing, to transfer a sum of RM120,000 from the ABBE account into his Maybank personal account through four transactions on May 8, 11, 12 and 21 in 2018 to be used for the GE14 campaign.

To a question from deputy public prosecutor Mohd Afif Ali on the source of the money deposited into the ABBE account, Nurul Hidayah said it was from the sales proceeds of Armada souvenirs, T-shirts and fundraising receptions organised by the wing.

Mohd Afif: On the fundraising reception, did you investigate how many such events were held?

Nurul Hidayah: Two receptions were held on April 7 and 8, in Muar, Johor and Hotel De Palma in Ampang. Both were held during the day.

Mohd Afif: Where did the proceeds from these events end up?

Nurul Hidayah: It was deposited into the ABBE account.

Meanwhile, during the afternoon proceedings, the atmosphere turned a little tense when lawyer Gobind Singh Deo, who represented Syed Saddiq, raised his voice when cross-examining the witness because she did not answer some of the questions posed.

It began when Nurul Hidayah disagreed with Gobind’s suggestion that there were welfare activities carried out by political movements in Muar.

Gobind: Why don’t you agree that it exists? Have you met Amsyar? (the individual said to have managed Syed Saddiq’s political and personal finances).

Nurul Hidayah: It was not me who recorded his statements.

Gobind: So, it wasn’t you who met and asked him (Amsyar)?

However, the witness kept mum when repeatedly asked by the lawyer to answer the question.

Gobind: Answer me, Puan Nurul Hidayah (with a raised voice). So, the truth is you don’t know do you? As an investigating officer, you have failed to fully investigate the case.

Nurul Hidayah, however, continued her silence.

He is accused of committing the offence at a bank at Jalan Persisiran Perling, Taman Perling, Johor Bahru on June 16 and 19, 2018.