Malaysia extends condolences to people of Japan over Abe's death

(FILES) In this file photo taken on April 21, 2015 Japanese Prime Minister Shinzo Abe waves as he leaves to Indonesia at the Tokyo International Airport in Tokyo. - Abe has been confirmed dead after he was shot at a campaign event in the city of Nara on July 8, 2022, public broadcaster NHK and Jiji news agency reported. (Photo by JIJI PRESS / AFP) / Japan OUT

Saifuddin said Abe was an iconic leader and he would always be remembered for his contributions to the economic development of Japan through "Abenomics”.

"He had also contributed significantly to Malaysia’s Look East Policy, where most recently, he represented the Japanese government as the Special Envoy of the Prime Minister of Japan to commemorate the policy’s 40th anniversary in Kuala Lumpur,” he said.

Abe served two terms as Prime Minister - first in 2006 and then again from 2012 to 2020. He also became Japan’s longest-serving head of government.

"Abe's legacy and contributions will be treasured and continue to live on,” he said.

Abe, 67, was shot from behind while delivering a speech at a political campaign in Nara city earlier. His assailant has been arrested.- Bernama 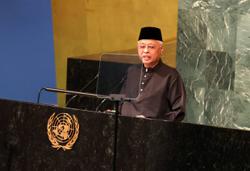