He said the projects were based on the assessment made by KASA secretary-general Datuk Seri Dr Zaini Ujang and Irrigation and Drainage Department director-general Datuk Dr Md Nasir Md Noh, who visited the flood location on Tuesday (July 5) to assess the impact of the disaster and to draw up a mitigation plan.

The four projects are Baling Flood Mitigation Plan (RTB) Phase 1 and Phase 2 involving a cost of RM15mil and RM160mil respectively, the construction of a sabo dam to reduce the risk of debris flow (RM22mil), and several small projects that need to be expedited such as deepening of rivers, building river embankments, repairing bridges and river trails (RM6mil), he said.

The flash floods and water surge phenomenon that occurred on Monday in Baling claimed three lives, while hundreds of victims were evacuated to several temporary relief centres and more than 80 houses were affected.

He said continuous rain that went on for three hours had caused the flash floods, adding that the Irrigation and Drainage Department station at Felda Teloi Kanan recorded a rainfall of 64mm, and more than 40mm of rainfall each was logged at the Kampung Sedim and Kampung Iboi stations.

Tuan Ibrahim said satellite data from the Malaysian Meteorological Department showed that the distribution of rainfall was more than double in Gunung Inas, which is upstream of Sungai Tiak and Sungai Kupang, adding that the heavy rain exceeded the capacity to hold water upstream causing the flash floods.

He said the depth of the floodwater that was recorded at 6 pm was between 0.2 to 3.0 metres in Kampung Iboi, Kampung Padang Lengkuas, Kampung Bukit Hangus, Kampung Pisang and Pekan Kupang.

Tuan Ibrahim said in the upstream area of the flood disaster, there were land-use activities that caused debris flows or water surges during heavy rain. - Bernama 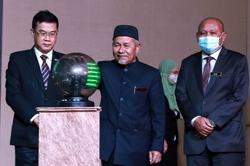