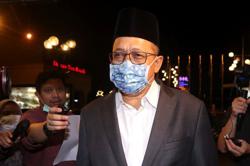 KUALA LUMPUR: The Kuala Lumpur City Hall (DBKL) will work closely with various international agencies as part of efforts to reduce climate change effects, as well as to overcome flash flood issues in the capital.

"Thus, I believe with the collaboration and assistance from TMG, Kuala Lumpur will be able to realise the vision of a flood-free KL into reality,” he said in his speech during a courtesy call from delegations from TMG at DBKL Tower here recently.

In his speech, Shahidan also shared DBKL’s 14 interim measures under the Flash Flood Mitigation Action Plan 2022 implemented last May while carrying out a study on building a high-capacity groundwater storage tunnel in Kuala Lumpur as a long-term solution.

Meanwhile, DBKL, in a statement on Wednesday (July 6), said that it received a working visit from a 12-member TMJ delegation, led by the Special Advisor to the Governor of Japan in the technical field, Nakajima Takashi.

According to the statement, the visit, among others, is aimed at sharing ways and experiences of their respective countries in implementing flood mitigation action plans, given that the flood situation in Kuala Lumpur was similar to Tokyo’s due to heavy rain spells in a short period of time. - Bernama