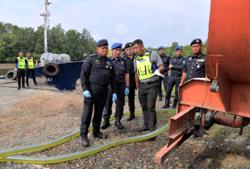 PENGERANG: Police have seized 138,000 litres of subsidised diesel worth more than RM380,000 during an operation at Sungai Bauk here on Friday (July 1) night.

Johor police chief Comm Datuk Kamarul Zaman Mamat said 13 individuals were arrested, including nine foreigners aged between 18 and 62 years during the raid at about 11pm.

He said one of them had a criminal record under the Dangerous Drugs Act 1952.

“The location where the police uncovered the syndicate was a base for them to transfer the diesel from the tank trailers into a foreign-registered vessel,” he said.

Comm Kamarul Zaman said initial investigation found that the tanker trailers would buy the diesel at the subsidised price of RM2.80 per litre from petrol stations around Johor and nearby states before coming to the river every three days.

“They will then transfer the diesel into the waiting vessel where the subsidised diesel would be sold at a much higher price on the black market,” he said in a press conference on Sunday (July 3).

Comm Kamarul Zaman added that the syndicate had been active for about a month before the police put a stop to their operations.

“We will be roping in the Inland Revenue Board to check the financial records of the owners of vehicles,” he said.

He added that police would continue to carry out such operations to eradicate smuggling activities in the state. 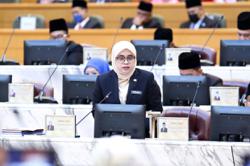