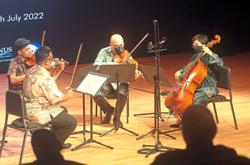 KUALA LUMPUR: A lecturer and his two postgraduate students who designed a futuristic city won the grand prize in the Future City Ideas Competition.

Muhammad Amiruddin Shah Ahmad Nizam, 31, a Masters graduate in Architecture from the Royal Melbourne Institute of Technology (RMIT), and the students won RM30,000 cash and a certificate for their efforts.

The students are Aiman Yusof and Hidayah Rosli, both 26 and final year Masters in Architecture students at Universiti Teknologi Mara (UiTM).

Muhammad Amiruddin Shah, now a UiTM lecturer, said: “It is a testing ground of a futuristic city that employs technology such as artificial intelligence, machine learning, with the help of human consciousness.

“It is not about a singular outcome but about the development of a futuristic city.

“With the aid of advance digital tools in computational design, the team extracted 160 iterations in understanding the future possibilities of a city,” he told The Star, on the sidelines of the official opening of the International Architecture, Interior Design and Building Exhibition (Archidex) 2022 at the Kuala Lumpur Convention Centre (June 29-July 2).

Muhammad Amiruddin Shah added that the “Tokyo 2135” prototype is not the end product but “a starting point of what a futuristic city might look like.”

He said the team spent about a month to develop the design.

“We feel blessed that the jury accepted our prototype among the 37 entries,” he said.

With the win, he said the team would now focus on developing more prototypes and multidisciplinary collaborations in extracting new outcome in built environment.

Deputy Works Minister Datuk Arthur Joseph Kurup, who opened the 21st edition of Archidex, said: “The construction industry is the life and blood of our country’s economy and will play a key and strategic role in the national economic recovery.

“I am confident we will be able to gain fresh perspectives and insights through their (distinguished speakers’) presentations on how we can continue to enhance the construction industry by utilising technology, infratech and building efficiencies based on data so we can do more with less.”

He added: “The Covid-19 pandemic has caused significant impact to the construction sector. Losses are estimated to be around RM42bil following the implementation of the movement control order from March 2020.”

He said the post-pandemic era has accelerated the adoption of digitalisation and Fourth Industrial Revolution (IR4.0) technologies across industries.

“The technology trends taking shape now will pave the way for economic recovery and growth in the coming years.

“Archidex Online has helped to continue connecting industry stakeholders by creating a community to bridge architects, interior designers, building professionals, property developers, industry specifiers, buyers and suppliers of architectural and building materials from near and far,” he added.

In his welcoming speech, Datuk Vincent Lim who is president of C.I.S Network Sdn Bhd – the joint organiser of Archidex – said: “Together, we have built Archidex as a multi-dimensional business platform and marketplace for every member of the architecture, interior design and building community to connect, collaborate and create new business ventures and bridges, to advance our economy and society further together.”

Lim said that Archidex – Asia’s leading architecture business event – remains an important annual gathering for all industry stakeholders to meet yearly, and that it is the place to build new partnerships and strengthen existing ties.

“This year, we are featuring 400 exhibitors from 12 countries throughout nine halls.

Among others, Archidex is also a place for business and trade deals, memorandum of understanding signings, regional industry and alliance meetings and government dialogues, he said.

Joint organiser Malaysian Institute of Architects (PAM) president Assoc Prof (I) Sarly Adre Sarkum said: “We need to future proof our practice by ensuring that we are prepared for a digital way of life and work.

“We must learn to be agile, adaptable, and flexible for now and the future. We must learn new languages in technologies and harness its great ability to make life easier and better.”

Speaking to reporters later, Kurup said that Archidex plays a crucial role, as the construction sector is very important for economic recovery.

“We will try our best for the industry to be vibrant. I hope we will continue to be progressive and forward looking, as well as provide futuristic (solutions) to improve our society’s quality of life,” he said.

On the new aspects included in the exhibition this year, Lim said that they have added more value to meet the demand of the younger generation who are IT savvy.

On his vision and hopes, Sarly Adre said that they want the exhibition not only to be the venue to celebrate new technologies and solutions but a place for like-minded friends from all countries and regions to come and exchange ideas. 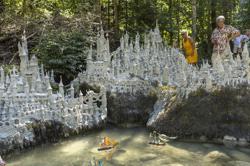