"The president (Datuk Seri Dr Ahmad Zahid Hamidi) has the right to appoint and remove members.

"That is his right and I have no issue with it," he said at a press conference Monday (June 27).

He said Tajudin was appointed to the position and Ahmad Zahid had the right to remove him from the supreme council.

Ahmad Zahid had also said that Tajuddin should not be surprised by his removal and should know the reasons behind it.

Tajuddin’s termination as the council member was made through a letter dated June 21 from Ahmad Maslan. 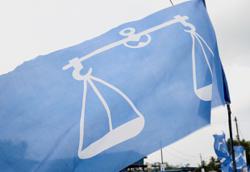