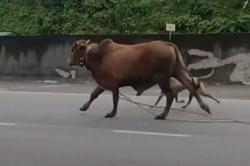 KUALA LUMPUR: An elderly man was gored by a bull at his doorstep as he was about to leave his house.

“The 81-year-old man was standing in front of his house to go out when he saw the bull running on the road,” said Sentul OCPD Asst Comm Beh Eng Lai.

He said the bull charged towards the man and gored him in the stomach, causing him to fall.

The man suffered a fractured spine and other injuries. He is now warded at the Park City Medical Centre.

In a statement yesterday, ACP Beh said the incident happened in Bandar Menjalara here at around 10.15am on Friday.

He said investigations showed that there was a police report about a bull which managed to free itself while it was in the midst of getting a nose ring placed on it on Friday.

The animal was given to a mosque near Kampung Selayang Lama for Hari Raya Haji celebrations, he said.

“We believed it was the same animal which attacked the elderly man,” he said, adding that the case was classified as negligently releasing an animal and causing danger to human life.

“Upon further checks, we also found a number of videos on social media about a bull chasing a lorry driver along the Middle Ring Road 2 heading towards Sungai Buloh,” he said.

One TikTok video on this has had 1.2 million views by yesterday evening.

“The lorry driver was not the owner of the bull. He was merely attempting to catch the animal,” ACP Beh said, adding that the man managed to tie the bull to an electrical pole but it escaped and began running towards Sungai Buloh.