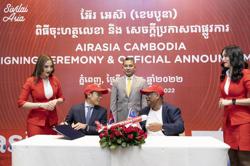 The Sabah Tourism, Culture and Environment Minister also said the airline was interested in introducing more international flights to connect the state capital in due time.

In a statement on Friday (June 24), he said this was discussed during a special meeting with AirAsia Malaysia chief executive officer Riad Asmat at the company's Kuala Lumpur headquarters on Thursday (June 23).

"I welcome the efforts of AirAsia in expanding both its domestic and international network, by introducing direct flights connecting Kota Kinabalu, Sabah.

"This will help to attract more tourists here as well as boost the state tourism sector," he added.

During the visit to the company's headquarters, Jafry also met with Capital A group CEO Tan Sri Tony Fernandes, who expressed gratitude to the Sabah government for cooperation given to AirAsia and the aviation industry over the years.