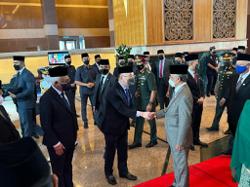 She was greeted upon arrival yesterday morning by Minister in the Prime Minister’s Department (Religious Affairs) Datuk Idris Ahmad.

His Majesty said the opportunity to meet and bid farewell to the guests of Allah was very meaningful as Malaysians have been waiting for two years for a chance to perform the haj due to Covid-19 pandemic restrictions.

“The Raja Permaisuri Agong and I are truly grateful because this year my people have again received an ‘invitation’ from Allah to be His guests in the Holy Land. Alhamdulillah.

“Malaysian pilgrims are urged to always practise good behaviour and stay away from unhealthy elements that could tarnish the country’s good image.

“All pilgrims must abide by the rules and laws set by the Saudi Arabian government in order to maintain the long-standing relations between the two countries,” said His Majesty.

The King said that during their stay in the Holy Land, pilgrims need to strengthen their resolve to perform the pilgrimage properly.

“Answer the call from Allah by increasing the obligatory or recommended duties of worship as a sign of gratitude for all the blessings that have been bestowed. “Performing the haj in earnest and practising good behaviour will help you to obtain a mabrur haj (accepted by Allah). Insya-Allah,” said the King.

The King said pilgrims should be thankful for the prevailing peace which has enabled them to fulfil the fifth pillar of Islam safely.

In expressing his appreciation and gratitude to the Saudi Arabian government for their cooperation and assistance, the King said the long-standing close relationship between the two countries has allowed Malaysian pilgrims to “return” to the Holy Land as well.

“We sincerely hope that this strong relationship between both countries will continue for the benefit of our pilgrims and ummah,” said His Majesty.

Bernama reported that Sultan Abdullah also expressed his happiness over the high commitment displayed by TH, government agencies and private parties involved in maintaining the quality of services offered to Malaysian pilgrims.

A total of 291 pilgrims departed for the Holy Land on Saudia Airlines flight SV 5633 to Jeddah at 4.45pm.

Some 14,306 Malaysian pilgrims have been allowed to perform the fifth pillar of Islam this year and will be assisted by 340 TH staffers.

Meanwhile, Comptroller of the Royal Household for Istana Negara Datuk Ahmad Fadil Shamsuddin announced yesterday that Sultan Abdullah had been admitted to a hospital in Kuala Lumpur to treat a leg pain.

He said the Yang di-Pertuan Agong is in good health and that there is no cause for concern.

“As such, all programmes scheduled for the day and later dates which involve the presence of the Yang di-Pertuan Agong have been rescheduled to other dates which will be announced later,” said Ahmad Fadil.

He said the King is scheduled to return to Istana Negara after his treatment.

“The people are urged to pray for the Yang di-Pertuan Agong’s early recovery, good health and longevity,” he added. 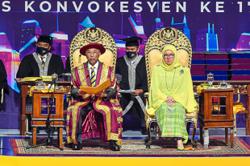