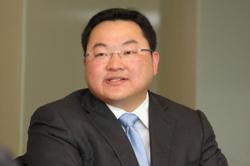 Prosecution witness Wedani Senen, the manager of the Real-Time Electronic Transfer of Funds and Securities System (Rentas) division unit at AmBank (M) Bhd at the time, testified that the funds were transferred to AmIslamic Bank accounts bearing the number 2112022009694 (codenamed "AmPrivate Banking – MR") and account 2112022011880 (codenamed "AmPrivate Banking – 1MY").

Both accounts belonged to Najib.

Wedani, who was reading her witness statement in the 1Malaysia Development Bhd (1MDB) trial involving Najib, said there were seven transactions going into his AmIslamic accounts between 2013 and 2014.

She further told the court that the US$61mil transaction came from Tanore Finance Corp into Najib's 9694 account (AmPrivate Banking – MR) on March 25, 2013.

It was said that Tanore is a company linked to Eric Tan, a close associate of Jho Low.

It was reported that the US Justice Department identified the two entities — Blackrock Commodities and Vista Equity — as being owned by Tan.

During a cross-examination by lawyer Wan Aizuddin Wan Mohammed, Wedani said she did not make any reports to Bank Negara Malaysia regarding the large transactions into the two accounts.

"We have a unit that does all the reporting to Bank Negara," said the witness, who is now AmBank's Swift division unit manager.

Wan Aizuddin: But from your unit, there was no doubt (on the transactions) that could warrant a report to Bank Negara?

The lawyer then pointed out that US$61mil going into one's account was a huge transaction.

Wan Aizuddin: Bank Negara never raised a red flag and asked for an explanation when this huge transaction was made?

Wan Aizuddin: Were you contacted by your superior on this?

Najib is on trial for 25 charges in total: four for abuse of power that allegedly brought him financial benefit to the tune of RM2.28bil; and 21 for money laundering involving the same amount of money.

We only used code names, I never knew customer was Najib, says witness