Former IGP: I was just visiting a friend's stall

The former Inspector-General of Police said it was an old snapshot of him posing at his friend's stall some time back.

"I visited my good friend's stall and a passer-by took the photo. My friend sells vegetables, meat and fish at his stall. He previously sold vegetables from my farm as well," he said when contacted on Wednesday (June 8).

Abdul Hamid downplayed the image and said he was enjoying retirement.

Yusof praised the former top cop's humility and bravery for selling vegetables in the market.

"Would others be as brave? He is not ashamed at all. Salute to you," he wrote.

After learning of Abdul Hamid's clarification, Mohamad Yusof tweeted that the first impression he got from the photo was that the ex-IGP was selling the produce since it was widely known that he owned a farm.

"If he is not selling vegetables and instead sits with his friends, (it) shows that he is accepted by the public," he said.

In interviews before his retirement in May last year, Abdul Hamid expressed his love for farming as his favourite hobby and said he planned to focus on it.

“I can finally return to farming. Trust me, it is peaceful. I encourage everyone to learn the basics of farming as it builds stamina and keeps the mind fresh.

“It is very rewarding, ” he said at the time. 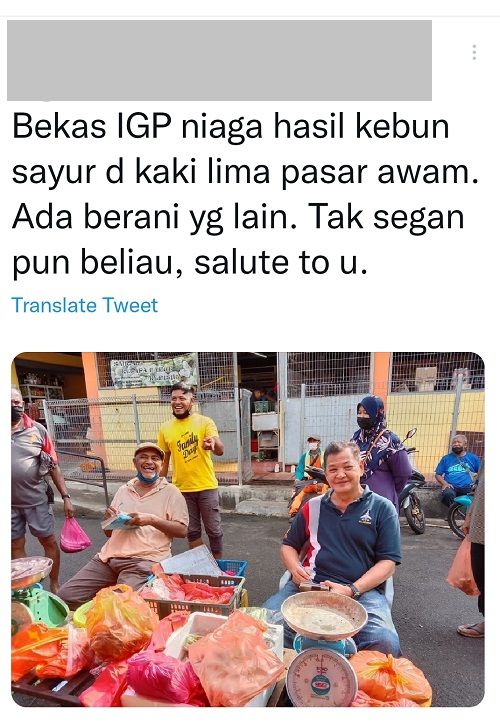