KUALA LUMPUR: Hundreds of kilos of meth pills along with an array of other drugs worth RM25.3mil were seized following a series of raids in Selangor and Kedah.

The haul could have supplied drugs to 3.4 million addicts.

Police also busted two drug syndicates with the arrests of four men and a woman in the two states on Thursday and yesterday.

Bukit Aman Narcotics Crime Investigation Department (NCID) director Comm Datuk Ayob Khan Mydin Pitchay said the first operation that came with the arrest of a 40-year-old man, was conducted in Selangor at about 2.30am.

“We seized 404.3kg of methamphetamine, 7.7kg of heroin and 35.3kg of ecstasy pills from the raid,” he told a press conference at Bukit Aman yesterday.

In a separate operation, police also conducted a series of raids in Selangor and Kedah resulting in the arrests of three men and a woman aged between 25 and 39.

“We managed to seize 248.7kg of the methamphetamine through the raids,” he said.

Comm Ayob said overall, a total of 653kg of methamphetamine, 7.7kg of heroin and 35.3kg of ecstasy pills worth RM25.3mil were seized from both operations. 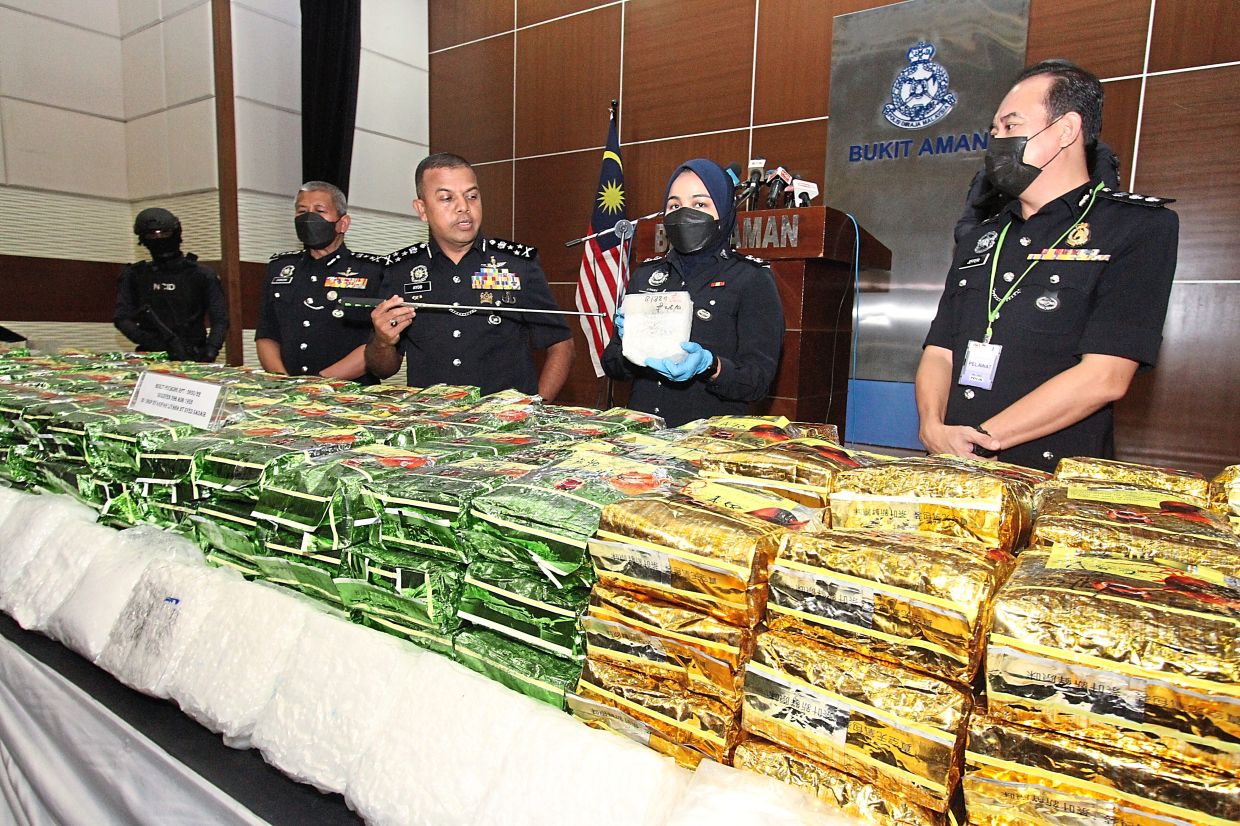 Hazardous substance: Comm Ayob showing the drugs that were seized, during a press conference in Bukit Aman while other officers assisted him. — MUHAMAD SHAHRIL ROSLI/The Star

“The drugs seized could have been supplied to about 3.4 million addicts,” he added.

Initial investigations revealed that both syndicates have been operating since late last year, Comm Ayob said.

“We believe they have been receiving drug supplies from the ‘Golden Triangle’.

“They are catering to the local markets and smuggling the drugs to Indonesia as well,” he said.

The suspects have been remanded for seven days, he said.

“Two of them also have prior criminal records.

“We also seized several vehicles including a Toyota Fortuner, a Mitsubishi Triton and a Ford Ranger worth RM360,000,” he said.

Efforts are underway to track down the remaining syndicate members, Comm Ayob said.

“We hope the public will continue to pass us the information on drug trafficking.