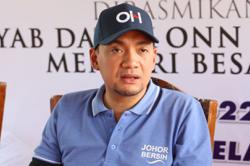 JOHOR BARU: Hospital Sultanah Aminah (HSA), one of the busiest hospitals in the country, is expected to get a facelift to improve the comfort of the public.

Johor Mentri Besar Datuk Onn Hafiz Ghazi said that he has told the concession company responsible to immediately improve the roads around the hospital and improve its landscaping.

"I have seen for myself the facilities, roads and landscaping around HSA and I have also informed Health Minister Khairy Jamaluddin about the situation.

"The concession company involved has been instructed to take immediate action for the improvement works.

"We have also suggested for the improvement works to be done at night so that it would not disrupt operations during the day," he said.

Onn Hafiz said this in his Facebook page on Sunday (May 29) after a surprise visit to the hospital.

"I have also contacted the Economic Planning Unit (EPU) and the Public Works Department (JKR) to immediately approve allocations to upgrade facilities in HSA," he added.

On Tuesday (May 26), state Health and Unity Committee chairman Ling Tian Soon paid a surprise visit to the hospital.

Ling noted that the two main issues faced by the hospital was the lack of parking space and heavy congestion, especially in the morning.

"I will bring forward these issues to the Mentri Besar and the Health Minister so that we can find a solution," he said in a Facebook post on Tuesday.