The Penang government is placing orders for new 8m-boats for the first batch of 20 eligible fishermen under the SIMP. From active engagements with the fishing community, the state found that they have a pressing need for new boats as well as proper berthing and storage facilities.

THE Penang South Reclamation’s (PSR) latest Social Impact Assessment (SIA) study has recorded a close to 80% approval rate from more than 700 survey respondents living near the proposed project on the south of the island.

The project owner, which is the Penang government, and the consultant have attributed the improved perception to a better understanding of the project, and its many benefits to the local community, namely the social welfare benefits local fishermen will receive under the Social Impact Management Plan (SIMP).

Some SIMP schemes are being rolled out ahead of the project, with several fishermen sent for seafarer training to earn their Certificate of Competency (COC) from the Marine Department to work as seafarers in Malaysian waters.

So far, nine have passed the training and they can now work on pontoons and vessels of less than 500 gross tonnage, and provide boat transportation to ferry construction workers and goods to earn additional income.

Arrangements to send a second batch for training are ongoing. Penang Deputy Chief Minister (I) Datuk Ahmad Zakiyuddin Abdul Rahman (right) announced the SIMP’s benefits for fishermen last year. Many fishermen, who have registered for the SIMP, were given an RM500 advance from their total ex-gratia amount.

The co-operative will handle the procurement of new boats for eligible boat owners and the construction of temporary facilities for fishermen in Permatang Tepi Laut and Kampung Binjai under the SIMP scheme, seafood marketing, water transport services, and other businesses that can generate income for its members.

When PSR construction begins, the local fishermen are eligible to seek and gain work opportunities to support the reclamation and future topside development activities based on their experience at sea.

Many fishermen, who have registered for the SIMP, were given an RM500 advance from their total ex-gratia amount. The state government is expected to pay 75% of the total amount after PSR’s Environmental Impact Assessment (EIA) report is approved by the Department of Environment.

The EIA is now under public display until June 18 at the department’s offices in Putrajaya and Penang (Kepala Batas, Komtar and at the Pusat Perkhidmatan Setempat Nelayan (PPSN) in Permatang Damar Laut). The latest SIA study is also reflected in the EIA report.

When the previous SIA report was prepared three years ago, the SIMP was still at the planning stage. The assessment only recorded 51.1% support from 635 respondents, who included 200 fishermen.

“The fishermen and residents received the right information on PSR, so they understand better why the development is important,” he said, adding that engagements with fishermen after the SIMP was announced early last year continued amid Covid-19 movement restriction challenges. Farizan (third from left) speaking to Gertak Sanggul fishermen about the Social Impact Management Plan. ‘The fishermen and residents received the right information on PSR, so they understand better why the development is important,’ he said.

As meetings in large groups were not permitted, small discussions were organised and SMSes and WhatsApp messages with information on the SIMP and PSR were sent to fishermen on a regular basis, he said.

“Through these efforts, the state found out that some of them need immediate help. For example, some fishermen need new boats. Others in Permatang Tepi Laut and Kampung Binjai need proper berthing and storage facilities along Sungai Bayan Lepas.

“So, we have been making the necessary preparations to provide the facilities in the last few months. We expect to start the construction in July this year. Once completed in 12 months, they will serve the fishermen temporarily until the new Permatang Tepi Laut multipurpose jetty is built in the future,” he said.

Under the SIMP, four new jetties will be built for the Permatang Tepi Laut, Teluk Kumbar, Sungai Batu, and Gertak Sanggul fishermen units following the reclamation phase of the three PSR islands. This ensures the new jetties will be protected from strong waves by the new islands.

The PSR project will also provide fishermen with a navigation channel of a minimum 250m width to give them 24-hour access to the sea.

Preparations are underway with the state Education Department to roll out tuition programmes for fishermen’s children this year.

“We want the children to do better in school so that they can further their studies and get good jobs,” said Farizan.

“These efforts will help the fishing community progress together with the PSR development. Many can see the benefits.”

Of the 314 fishermen interviewed in the SIA study, 74.8% said they agreed with PSR. Of the remaining 450 SIA respondents consisting of residents and business operators, 82.3% also said they agreed, leading to the overall approval and acceptance rate of 79.1%.

“With the accurate information they receive from PPSN, which are operating in their areas, the fishermen are seeing the real picture and understanding the SIMP benefits,” said the town planner with 25 years experience in the field. The first batch of nine fishermen completed their seafarer course in March under the SIMP, earning their Certificate of Competency (COC) from the Marine Department to work as seafarers in Malaysian waters.

It was previously reported in the media that the project owner, the Penang government, started registering affected fishermen for the SIMP scheme last year.

According to Fisheries Department records, there are 952 registered fishermen in the nine fishermen units in south Penang Island, the PSR zone of influence (ZOI).

Saiful said the latest SIA study surveyed 314 fishermen from the Gertak Sanggul, Teluk Kumbar, Sungai Batu, Permatang Tepi Laut, Pulau Betong, Kuala Sungai Burung, Seri Jerejak, Batu Maung and Teluk Tempoyak fishermen units in January this year – which was more than the 200 fishermen interviewed in 2019. They used the Krejcie and Morgan sampling method to determine the size of the sample that represented the population of fishermen and residents in the project ZOI.

“We interviewed more fishermen this time to ensure the randomly chosen sample produced more accurate data to represent the local fishing community. The larger the sample, the higher the confidence level and the lower the chances of errors in the data.

“The fishermen were also more cooperative this time because they could see the state government trying to assist them,” Saiful said.

In the survey, the fishermen were asked about their concerns about environmental quality access to the sea and beach, public amenities, issues with the road network and drainage, safety, exposure to pollution, erosion, floods, marine traffic disruption, the rising water level at the estuary, and, rising property prices and rent. Fishermen were also asked about their fishing activities, views on PSR and its benefits like job and business opportunities, and the project’s impact on their work.

Saiful said the fishermen’s concerns were similar as before – centred around issues like misinformation, affected income, dwindling fishing ground, safety and disruptions during fishing.

“They worry about their safety during dredging and reclamation works, as there will be dredgers and vessels transporting sand moving about in the waters.

“They are worried that their catch will be affected and they will have to venture further to fish,” he said.

Saiful said mitigation and environmental measures stated in PSR’s EIA report would ensure reclamation works would be carried out safely and in a controlled manner, as well as minimise environmental impact.

Referring to the PSR Ecology Offset Masterplan (PEOM), he said the measures were thorough and went beyond managing the usual environmental issues caused by construction projects. A fisherman learning about chart work, which involves laying a safe course at sea, during the seafarer course.

Saiful said PSR’s overall mitigation and ecology offset programmes could serve as an example of how fishermen’s livelihood and activities could be properly sustained without being disrupted by reclamation developments.

“From our experience, we have not seen another mitigation plan as holistic as PSR’s in helping fishermen.

“There was none like this before, which led to fishermen feeling side-lined and ignored because they were deemed unhelpful to the proposed project,” he said.

Understanding the EIA and mitigation for reclamations 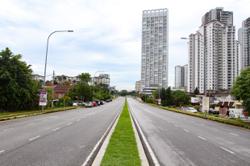 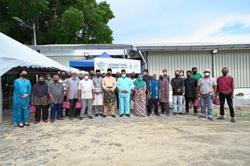