Big loss: The condolence message from the police force.

KUALA LUMPUR: DSP Kenneth James Woodworth became a household name when he brought down infamous armed robber Botak Chin, killing two of his henchmen in a shootout between the police force’s Magnificent 12 and the notorious gang.

Woodworth, who passed away aged 89 at the Universiti Malaya Medical Centre (UMMC) in Petaling Jaya on Sunday, was part of the elite team formed to end the gang’s reign of terror.

He once told of how he had emptied his Sterling submachine gun, firing 100 bullets at the robbers during a showdown at the Eng Leong Sawmill in Batu 3, Jalan Ipoh, here.

Formed under the leadership of DSP S. Kulasingam, the team included some legendary policemen such as Woodworth himself who was ASP then, ASP Gilbert Ang, Bahwandi Hiralal, G. Rajalingam, Gui Poh Choon, Ong Kim Hock, Sgt Chong Kam Wah and Cpl Leong See Fook, among others.

“My Sterling carries 20 bullets in one magazine. I emptied three magazines at them. I shouted for more ammo and got two more magazines thrown at me. I emptied both, too. Altogether, I fired 100 bullets at the two men. Both died.”

The two who died were Botak Chin’s henchmen Pangkor Chai and Sakai Chai but the gang leader was also hit by the bullets – in the arms and legs – and crawled into a storeroom to hide.

Woodworth, who had dubbed the team “The Dirty Dozen”, retired from the police force in 1988 as a deputy superintendent of police (DSP) but later fell ill.

His remains were taken to the Holy Rosary Church where people can pay their last respects from 9am yesterday until 9.30pm today.

Senior Asst Comm Nik Ezanee Mohd Faisal said Woodworth was a true hero and his passing was a huge loss to the police force.

“I managed to meet him in 2020 when I was Petaling Jaya OCPD.

“Since that meeting, I regularly visited him and always bought him thosai when I was in Petaling Jaya,” he said.

“I’ll always remember his words: Right or wrong, Malaysia is still my country.

“Kenneth’s words and actions have inspired me to always do my best. He was a true patriot,” he said.

“He was a senior police officer from the Kuala Lumpur CID Serious Crime division when he was selected to join the Magnificent 12, the special team set up to hunt down Botak Chin.

“His contribution and sacrifice will always be cherished. His passing is a big loss for the police force and the country,” the police said in a statement on their Facebook page. 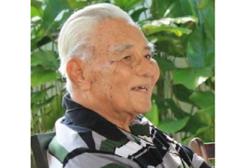