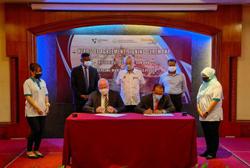 The Transport Minister said the facility would benefit not only industry players but also the community and the island as a whole.

“Straits, a group listed on Bursa Malaysia through its unit Victoria STS (Labuan), has entered into a HOA with Fendercare Marine, a company listed on the London Stock Exchange, through its parent James Fisher.

“This HOA aims to establish collaboration between both parties in STS services,” he said in a Facebook post yesterday.

The minister congratulated Straits under the leadership of Tengku Baharuddin and Fendercare Marine on the joint venture.

“I am confident both parties will ensure Asia’s largest STS hub can benefit the people and the country,” he said.

In a separate post, Dr Wee said he had visited the proposed site in Rancha-Rancha industrial area.

“Dermaga Merdeka port can no longer cope with future needs. A meeting was held and LPA has proposed the construction of Rancha- Rancha harbour via a ‘request for proposal’,” he said.

On another matter, Dr Wee said certified instructors would be arranged to conduct Goods Driving Licence (GDL) courses to benefit the people of Labuan.

“I listened to their views and suggestions. Among the problems raised were difficulties in obtaining GDL for Labuan residents and attending courses in Kota Kinabalu.

“Previously, there were qualified instructors to deliver GDL lectures for six hours before candidates took the test,” he said.

“Apart from that, some representatives asked the Transport Ministry to study methods to encourage ships to enter Labuan Port and facilitate logistics and procurement of essential goods.

“I then shared the efforts of the ministry in creating more employment and business opportunities for the people,” he said. 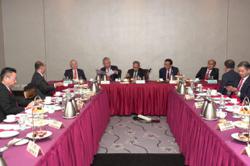