SEREMBAN: Once earmarked for beef production, part of the former National Feedlot Centre (NFC) land in Gemas near here will be leased out to Selangor to grow grain corn for animal feed, says Datuk Seri Aminuddin Harun.

The Mentri Besar said that the state government, through Mentri Besar Incorporated, would lease out 160ha to the Selangor Agricultural Development Corporation (PKPS) and the project would be carried out soon.

"We have agreed to form a joint venture with PKPS to grow grain corn and hope this will reduce our import bill.

"More states should do likewise so that we can together reduce our dependence on imports," he told reporters after chairing the state exco meeting.

It was reported that the prices of grain corn and soybean meals, the two main feed for chickens, have increased by 13% and 11% respectively since January.

The rise in the prices of chicken feed also contributed to the increase in production cost for chickens, causing prices to go up.

In 2007, the state government through MBI had leased 607.5ha for an integrated livestock farming and beef production facility called the NFC.

The project, which was to manage the import of livestock and handle feed lotting, slaughtering, processing and marketing of beef to meet rising demand.

However, the project became embroiled in controversy for being poorly managed as noted in the Auditor-General's Report 2011 despite a RM250mil soft loan having been approved.

Aminuddin said it was important for all state governments to take measures to increase food production as imports were getting more expensive with several countries restricting exports to prioritise their domestic markets.

"To ensure we have sufficient food, my administration has also leased land to those interested to grow vegetables and I must say the response has been encouraging.

"We will also lease another 32ha in Gemas and 40ha in Jempol for freshwater fish rearing projects to ensure prices remain stable," he added. 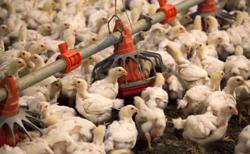