PETALING JAYA: The government should recognise the use of cannabis for medical purposes, says Syed Saddiq Syed Abdul Rahman.

The Malaysian United Democratic Alliance (Muda) president said these medical patients were not people who distributed cannabis to make money.

“We need to handle these cases carefully so that patients who are forced to use cannabis for medical purposes are given due leeway.

“Hanging is an excessive punishment for these patients simply because their health problems require them to seek alternative medications such as cannabis and hemp.

“The actions of patients seeking this alternative should never be equated with the crime of murder, for example - when the death penalty is imposed,” he said in a Facebook post on Wednesday (May 18).

The Muar MP said it was time for Malaysia to follow in the footsteps of more than 40 countries around the world in recognising cannabis as a medical alternative.

“The steps taken in other countries should also be seen as an impetus for Malaysian health groups to offer this alternative medicine immediately.

“In fact, world health bodies such as the World Health Organisation (WHO) also recognise the use of cannabis for these medical purposes as an alternative for patients,” he said.

“Among the things I emphasised was to empower the Attorney General's Chambers to give greater consideration to the issue of cannabis use.

“Judges should also be given more power and flexibility in assessing cases related to the use of cannabis for medicine,” he said.

Syed Saddiq had earlier visited the Petaling Jaya court complex on Wednesday for the mention of the case against Nasyid singer and composer Muhammad Yasin Sulaiman, who was charged in separate courts with cultivating cannabis plants and trafficking 214g of the drug at a condominium in Kota Damansara.

The charge was framed under Section 6B (1)(a) of the Dangerous Drugs Act 1952, which carries life imprisonment and at least six strokes of the rotan, upon conviction.

The former youth and sports minister also vowed to follow the development of Yasin's case from time to time.

“Yasin’s court case will definitely be a reference for MPs like me in an effort to review laws related to the use of cannabis and hemp for medicinal purposes,” he said. 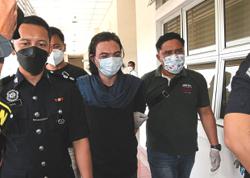