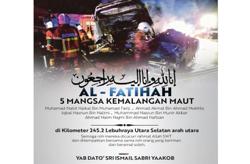 KUALA KANGSAR: A trailer driver was charged at the Kuala Kangsar Magistrate's Court here with five counts of reckless driving that resulted in the death of five Universiti Sultan Azlan Shah (USAS) students on the North-South Expressway.

The offence was allegedly committed at KM245.2 of the northbound side of the highway here at about 1am on May 12. All the charges were read out separately before Magistrate Mohd Shazmeer Zamhari.

The charge under Section 41(1) of the Road Transport Act 1987 provides for imprisonment of between five and 10 years and a fine of RM20,000 to RM50,000 on conviction, with details of the conviction to be endorsed on the driver's licence.

Deputy public prosecutor Nur Asmaniza Mohammad proposed bail of RM10,000 for each charge and suspension of his licence until the case is disposed of.

However, lawyer G. Ravishankar, who represented the accused, applied for a lower bail on the grounds that his client had to support his wife and three children aged two to 14.

Mohd Shazmeer ordered for the accused's driving licence to be suspended, and allowed him bail of RM20,000, which is RM4,000 for each charge. He set June 30 for mention of the case.

The five students were travelling in a car when it was rammed from behind by a trailer carrying iron fencing, causing the vehicle to crash into a mosaic tiles-laden trailer in front, and bursting into flames.

Police said the five students were burnt to death. - Bernama 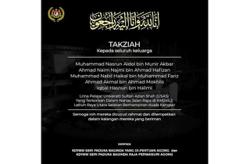