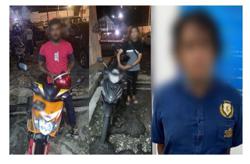 KOTA KINABALU: A contractor was killed and three others injured in a three-vehicle crash along Jalan Lintas near Taman Iramanis here during the wee hours of Saturday (May 14).

The 26-year-old truck driver died on the spot while a 30-year-old car driver and a 23-year-old passenger suffered injuries in the accident at about 1am.

Also slightly injured were the 26-year-old BMW driver and 25-year-old passenger of another car that was involved in the crash. All were sent to the Queen Elizabeth Hospital here for treatment.

Kota Kinabalu City deputy police chief Supt George Abd Rakman said the initial investigation found that two of the vehicles were heading in the direction of Penampang via the Jalan Lintas when a third vehicle came out of an intersection, triggering the crash.

"One of the car drivers was thrown into a small drain following the crash," he said.

Supt George said that the first car caught fire but the blaze was put out by the BMW driver.

"The BMW driver put out the fire with the help of a petrol station employee who was present at the accident site," he added.

He said police investigations on the fatal accident were continuing under Section 41(1) of the Road Transport Act 1987.

"The public who saw or have more information related to the accident are asked to come forward to assist in the investigation," he said.

In an unrelated accident, police in Tawau are investigating a three-vehicle accident that involved the death of a 21-year-old motorcyclist at KM10 Jalan Tawau-Bombalai two days ago.

Tawau district police chief Asst Comm Jasmin Hussin said Saturday that the motorcyclist was overtaking when a collision took place with two other vehicles - a four-wheel drive and a car.