Off the roads: People removing escooters along Jalan Sultan Ismail in Kuala Lumpur.

When did it become a common sight in Malaysia?

MICROMOBILITY vehicles emerged as a phenomenon in Malaysia in mid-2019 when shared escooters (electric scooters) were first made available for rent to commuters at KL Sentral by Beam, a Singapore-based micromobility company.

Operating in partnership with Malaysian Resources Corporation Bhd (MRCB), the service was soon extended to hotels and condominiums in the city, making the purple Beam scooters a familiar sight in Bukit Bintang, KLCC, Ampang and other popular areas in the capital.

Why did it become a problem?

The ugly side of the use of these vehicles emerged soon after - scooter abandonment and obstruction issues began to crop up all over the city. Kuala Lumpur City Hall (DBKL) was forced to start clamping down on the two-wheelers and city police imposed a ban on the use of escooters on public roads on Jan 1, 2021.

The Covid-19 pandemic put the brakes on the growth of micromobility services as people’s movements were restricted, but the upsurge resumed as soon as the Klang Valley entered Phase Four of the National Recovery Plan (NRP) last November.

When did it become a real problem?

As more city folk were seen whizzing around on various micromobility devices on public roads in the Klang Valley, complaints lodged with the city’s hotline services and the police about these vehicles zooming at an alarming speed and users disregarding traffic rules began to pile up.

On April 26 this year, the Transport Ministry put a ban with immediate effect on the use of several types of micromobility vehicles on public roads in order to safeguard road users.

Later, a directive was issued to the relevant authorities to allow the disabled community who use these vehicles to use them in bicycle lanes and cross roads both with and without zebra crossings.

Bicycles and electric bicycles are the two types of such devices not affected by the new rule, along with trishaws.

The ministry also entrusted the respective local authorities in each state to draw up by-laws to address various issues regarding the legal aspects of the use of micromobility vehicles on public roads.

A DBKL spokesman said that they would need time to study licensing issues as well as the feasibility of the use of micromobility vehicles in Kuala Lumpur.

Until then, escooters are illegal in the Federal Capital. 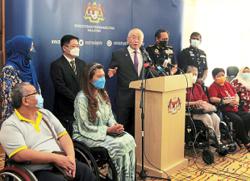