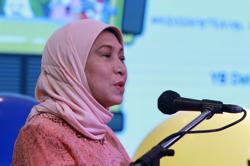 PETALING JAYA: The East Coast Rail Link (ECRL) tickets will be as affordable as the KTM Bhd (KTMB) fares, and it is untrue that it will cost six times more than regular flight tickets, says Transport Minister Datuk Seri Dr Wee Ka Siong.

He was responding to the comments made by Azan Ismail to a portal on Thursday, where the Terengganu PKR chairman claimed that ECRL tickets would be priced exorbitantly.

“Azan’s claims that ECRL passenger tickets will be six times of the air fares is purely speculative, baseless and devoid of any hard facts.

“The ECRL passenger fee structure will be similar to KTMB’s fare structure, which will be affordable,” said Dr Wee in a Facebook post yesterday.

“The estimated fare will be based on the Railway Scheme as per the Land Public Transport Act,” said Dr Wee, who added that the fee structure of ECRL tickets will be affordable, while taking into account operational and maintenance costs at the same time.

“Most importantly, it should not pose any undue burden to the public,” he said.

Dr Wee also stressed that Putrajaya has no intentions of developing public transport infrastructure that are priced beyond reach, or those that fail to serve the public well.

“In recovering the development costs for ECRL, there will be other businesses that should generate revenue in tandem with the cargo component to serve a multitude of industries from manufacturing to fabrication, which should comprise more than 70% of ECRL’s revenue source once it is expected to be operational in 2027,” said Dr Wee, who added that ECRL’s fare structure needs to be approved by the government prior to operations.

On May 3, Dr Wee said traffic congestion to and from the peninsula’s east coast during festive seasons is expected to be resolved once the ECRL is completed in 2026.

In response, Azan told MalaysiaKini on May 5 that ECRL tickets could be expensive due to costly construction.

ECRL is a 665km route that runs through Kelantan, Terengganu, Pahang and Selangor with links between the Kuantan Port and Port Klang via the northern part of Selangor.