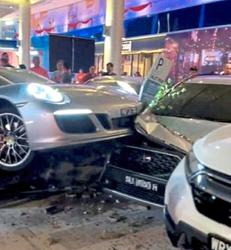 Dr Wee said the Road Traffic (Prohibition of Use of Certain Microbility Vehicles) Rules 2021 had been enforced since Dec 17 last year.

“We want to enforce this because more and more micromobility vehicles are being used on the road of late.

“This can pose a danger not just to the users but also to other road users,” he told reporters on Tuesday (April 26).

Dr Wee pointed out that authorities were not prohibiting the use of these vehicles in total.

“The public can use these devices. But they cannot use it on public roads where these vehicles will mix with other motor vehicles and put everyone at risk,” he explained.

The use of certain microbility vehicles are also not permitted on roads in residential areas, he added.

On the use of bicycles, Dr Wee said that although its use on roads is allowed, it would have to abide by regulations under the Road Transport Act and Road Traffic Rules.

Guidelines on safe use of bicycles have been issued by the Malaysian Institute of Road Safety Research (Miros), he said.

For electric bicycles, only those which meet Malaysia Standard MS2514: Electric Bicycles (electric pedal-assisted bicycles) specifications are allowed to be used on the road, he added.