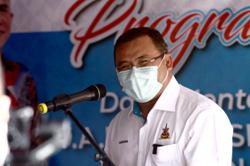 PUTRAJAYA: Gombak Member of Parliament Datuk Seri Mohamed Azmin Ali won his appeal in the Court of Appeal on Wednesday (April 13) to strike out a lawsuit which was filed against him by 10 voters from his constituency for alleged deceit and breach of fiduciary duty.

"There is no necessity for the suit to proceed for full trial.

Justice Yaacob, who delivered the court's unanimous decision, allowed Mohamed Azmin's appeal to set aside the decision on June 30 last year by the Kuala Lumpur High Court that disallowed his application to strike out the suit.

"We are of the view that there is an appealable error by the High Court judge in disallowing the appellant (Mohamed Azmin's) application to strike out the suit warranting appellate intervention," he said.

The court, however, did not award costs citing that the case was a public interest case.

The 10 voters filed the suit against Mohamed Azmin, who is the International Trade and Industry Minister, on Nov 27, 2020, for alleged deceit and breach of fiduciary duty as their member of Parliament through the "Sheraton Move' that caused the Pakatan Harapan government to collapse in February the same year.

In their statement of claim, the voters sought, among others, a declaration that Mohamed Azmin, as the Gombak MP, had breached his fiduciary obligations, deceived them during the election in the constituency and also breached the representation made to them.

They sought damages including aggravated or exemplary damages, interests, costs and other orders deemed fit by the court.

On March 12 last year, Mohamed Azmin filed an application to strike out the suit claiming that the suit did not disclose a reasonable cause of action and was frivolous, vexatious and an abuse of court process.

He contended that the suit violated his fundamental right to freedom of association as provided under Article 10 Clause (1) (c) of the Federal Constitution.

Muhammad Nizamuddin argued that that the suit should be struck out as the voters' claim was bound to fail because they would not be able to prove that they had voted for Mohamed Azmin during the 14th General Election.

Muhammad Nizamuddin also said that the voters' claim has the effect of restricting his client's right to freedom of association under Article 10 (1) (c) of the Federal Constitution.

Shanmuga, however, countered saying that the suit should proceed for trial as the voters can prove that they voted for Mohamed Azmin in the 14th General Election by giving oral evidence in court.

He said the voters' claim was not based on the manifesto but on the representation made by Mohamed Azmin to them (voters).

Shanmuga also said that the voters' claim did not affect Mohamed Azmin's right to freedom of association since the claim was not to unseat him from his postition as MP.