KUALA LUMPUR: While supporting the amendments to the Federal Constitution, Julau MP Larry Sng says independent candidates should be exempted from the proposed anti-party hopping law.

He said this was to protect the interest of independents who contested in an election based on their own credibility and stand.

"The law is here not to protect the party but the mandate of the people," he said while debating the Constitution (Amendment) (No.3) Bill 2022, in the Dewan Rakyat on Monday (April 11).

He said that independent candidates do not use any party’s logo, funding or political narrative.

"Most of the time, they will form their own judgments in order to move forward," he said.

“If we look at the last general election (GE14) results, three independent MPs were elected.

“I support this Bill, but I hope that an exemption will be given to these independent MPs as their situation is different from MPs fielded by political parties," he noted.

He also urged the government to fine-tune the definition of party hopping.

Sng won the Julau seat as an independent in 2018, joining PKR shortly after his victory.

He then left the party in February last year to become an independent MP and declared support for the then ruling Perikatan Nasional coalition.

Subsequently, he became the president of a new party, Parti Bangsa Malaysia, in January this year. 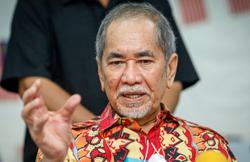