Long queues were reportedly seen at the EPF's branches in Kuala Lumpur, Shah Alam and Kuching.

The fund's app also appears to be down, likely due to the high incoming traffic.

Several users have taken to Twitter to vent their frustrations.

"Seems to be April Fool's from KWSP today," a Twitter user who goes by the name of @KucingKuncitara said.

Many users on Twitter had posted screenshots of the portal stating that the system is under maintenance.

As of press time, EPF had not released a statement on the issue.

The EPF had on March 16 announced that applications for the withdrawal facility would be open to members below 55 years of age from April 1 to 30, while payment would be made from April 20.

Earlier, the fund announced that those who wish to withdraw their EPF savings under the Special Withdrawal facility may now do so via the EPF portal at https://pengeluarankhas.kwsp.gov.my/.

Members should refer to the guidelines and frequently asked questions (FAQ) in the portal for more details.

Application status can be checked from April 9 via the same URL as above.

Special withdrawal applications may now be made on EPF portal 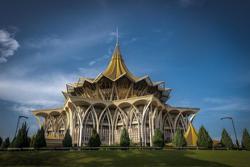