Happy family: Nurliyana and Mir Azizierahimi with their elder daughter during a holiday in Cameron Highlands last year.

KUALA LUMPUR: Nurliyana Sabri and her husband were caught by surprise when she went into labour early morning while at a hotel near Putrajaya – where she gave birth unaided not long later.

The secondary schoolteacher had to rely on her experience of her first childbirth to stay calm and even had to tie the umbilical cord with face mask loops while waiting for the ambulance.

However, it turned out to be a blessing in more ways than one – the hotel has decided that the family will get free accommodation on the little girl’s birthday for life, subject to terms and conditions.

Nurliyana, 29, who gave birth to her second daughter in Room 107 of the hotel at 6.27am, said the entire episode was totally unexpected.

She and her husband had travelled from Kluang in Johor with their two-year-old daughter to Putrajaya at 1am on Sunday because her husband, also a secondary schoolteacher, had to attend a seminar later that morning.

They checked into Saujana City Hotel in Jenjarom, Selangor, at 4.30am as they thought that it would be a good place to rest, as it is only about 20 minutes away from Hospital Putrajaya.

“I actually started having contractions at 3am but based on my previous experience with my first daughter, I thought it would be a long wait.

“I was already past my due date which was on March 24, so we went to the hospital after I started having contractions. The doctor said my dilation was only 2cm, so I couldn’t get admitted,” she said.

After they checked in, Nurliyana said she started having contractions five minutes apart.

Her husband, Mir Azizierahimi Mustafa, 34, was also caught off-guard. He said he woke up at 6am to find his wife already crouching down and about to deliver.

“I simply forgot to call for an ambulance until my wife told me to do so. By then, I could already see the baby’s head.

“I couldn’t get any cellphone reception in my room, so I rushed to the receptionist to make the call. The doctor who took the call was very helpful and guided me on what to do next, such as tying the umbilical cord and washing the baby,” he recalled.

As he was on the phone, Nurliyana gave birth to their second daughter alone in the room, keeping calm by relying on the experience of her first delivery.

“I knew I had to push three times, but I don’t remember cutting or tying the cord. We improvised by using face mask loops as strings to tie the cord. The ambulance arrived after 15 minutes to take us to the hospital,” she said.

Their newborn daughter, who has yet to be named, is currently being monitored at the neonatal intensive care unit.

Saujana City Hotel director Sivakumar Nalasamy was over the moon at hearing that a baby was born at his hotel. He decided that the baby’s family would get free accommodation on her birthday – for life.

“I received a call from a worker at around 6am telling me someone was giving birth, so I asked him to call for an ambulance.

“In Indian culture, it’s a good omen when a baby is born in our place. I hope this incident is a good sign for business growth,” he said. 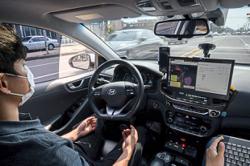