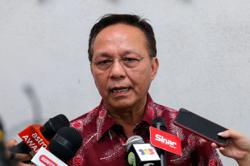 As at 12.06am Sunday (March 13), the EC said Barisan Nasional had officially won in 38 seats, giving it a two-thirds majority.