PETALING JAYA: An in-app function in MySejahtera to allow the public to register themselves as organ donors may be available soon, says Health Minister Khairy Jamaluddin.

"Given that the rate of organ donation in Malaysia is one of the lowest in the world, we are trying our best to make it easier for people to register as donors.

"As such, we are suggesting to include an in-app function on MySejahtera where users can pledge to donate their organs," he said when launching the 16th Annual Dialysis Conference 2022 here.

He added that the incidence and prevalence of End-Stage Kidney Disease (ESKD) in Malaysia had risen markedly in the past 25 years.

"The Malaysian Dialysis and Transplant Registry reported 7,967 new patients receiving dialysis in 2015 with the number increasing to 39,711 patients at the end of 2016.

On the topic of reopening the nation's borders, Khairy told reporters that this would be announced by the Prime Minister next week, barring any changes.

"The Cabinet has agreed on this in a meeting yesterday and we are currently awaiting the announcement from the Prime Minister," he said.

He added that the announcement would allow those involved in the travel industry to make the necessary preparations before borders reopen. 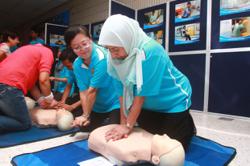