SEREMBAN: A 55-year-old woman, who ran as an independent candidate for the Port Dickson parliamentary seat by-election in 2018, has been charged with murder at a Magistrate's Court here, for allegedly stabbing her husband to death at their home in Rasah Kemayan .

No plea was recorded from Lau Seck Yan after the charge was read to her before Magistrate Norzaliza Tesmin on Friday (Jan 28).

Lau, a former lecturer who had contested as an independent during the Port Dickson by-election in 2018, was however heard saying "Tapi saya tak buat" (But I didn't do it).

The mother of four girls was accused of murdering 55-year-old Poh Seng Hiap at their home at the Rasah Kemayan Golf and Country Township between 3.30pm and 4.30pm on Jan 23.

Poh had previously worked as an accountant in the private sector.

Lau was charged under Section 302 of the Penal Code which carries the death penalty upon conviction.

Ng Kian Nam, who represented Lau, then asked the court to send Lau for a psychiatric assessment but Norzaliza said it was not necessary at this stage.

Deputy public prosecutor Hafizah Zainul Hashimi asked the court for a mention date as she had yet to get the post-mortem, toxicology and chemistry reports.

Norzaliza then fixed Feb 25 for next mention.

The accused was also denied bail due to the nature of the offence.

Lau, who was brought handcuffed to court at about 9.30am, was seen crying and telling reporters her version of the incident.

Seremban OCPD ACP Nanda Maarof was quoted in earlier news reports as saying that Poh had stab wounds in the chest and abdomen.

He added that police received a call about the incident from the victim’s 18-year-old daughter.

Two of the couple's children reportedly witnessed the incident.

ACP Nanda said a preliminary probe indicated that the motive for the incident was related to financial problems.

He added that police had also seized a sharp object from the crime scene. 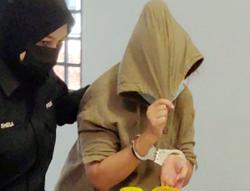