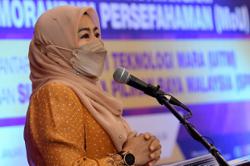 PETALING JAYA: More than 450,000 students in higher education institutions (HEIs) will be eligible to vote and shape the outcome of upcoming elections following the implementation of Undi18.

This is about 38% of the 1.2 million students in the country's HEIs, says Higher Education Minister Datuk Seri Dr Noraini Ahmad.

“As such, the Higher Education Ministry has a role to play in preparing students from a political point of view and inculcating the correct understanding of the country’s political landscape.

“Based on a study the ministry conducted last year to assess varsity students’ political literacy, it can be improved on by consolidating and strengthening their appreciation of existing policies and Acts.

“The Ministry is collaborating with other government departments and agencies to raise students’ awareness (of political matters) as they prepare to become voters,” she said.

She added that the country is expected to see almost 23 million eligible voters in the 15th General Election, an increase from the 15 million for GE14.

Noraini was speaking at the signing of a memorandum of understanding between Universiti Teknologi Mara (UiTM) and the Election Commission (EC), and the launch of the UiTM DNA report on Thursday (Jan 27).

On UiTM’s collaboration with the EC, she said the university is one of the largest institutions in Malaysia, with 185,400 students across the country.

Of that number, Noraini said 46% or 85,284 are aged between 18 and 20, which is almost 19% of all HEI students in the country who are eligible to vote following the implementation of Undi18.

“This collaboration between UiTM and EC is a proactive move... in the ministry’s Voter Education Awareness Programme among varsity students,” she said, adding that it is important to produce graduates who are politically aware.