SUNGAI PETANI: A young lad is earning praise on social media for his sterling live reporting skills after he and his friends found a large python while cleaning a neighbourhood mosque near here.

Holding the phone in front of him, Muhammad Haziq Mohd Asyraf, 12, went live and delivered a dramatic, energy-packed account of his encounter with the reptile.

His spoken Bahasa Malaysia was crisp and grammatically accurate.

Malaysians praised his parents and teachers for guiding him well, many saying that Muhammad Haziq has what it takes to be a top quality reporter.

Subsequently, a TV news crew from Astro Awani went to his village in Bukit Selambau near here to interview him on Tuesday (Jan 25).

They handed him the mike and he began to interview village market traders while a videographer recorded him.

His road to fame began on Monday (Jan 24), when he and his friends were cleaning the Bukit Selambau mosque compound.

While flushing down the drain, they noticed that the water was not flowing.

Thinking the drain was clogged, they lifted the concrete drain covers and found a brown python coiled up below.

For two minutes and 47 seconds, Muhammad Haziq went on Facebook Live and gave a fast-paced account – first greeting viewers and then introducing himself by his full name before delivering his news flash, vividly conveying the shock and drama of his experience.

Civil Defence personnel arrived later and snared the python. In another video, the python appeared to be almost three metres long.

Muhammad Haziq told Astro Awani that being a reporter is one of his ambitions and he likes to hold the microphone and talk.

He revealed that his encounter with the python was the first time he had ever gone on Facebook Live.

He can bake cakes and make curry puffs, doughnuts and even waffles, which he sells in his community to earn pocket money.

Muhammad Haziq said he learned to trade from his father Mohd Asyraf Ahmad, 37, who is a trader at the Bukit Selambau market. 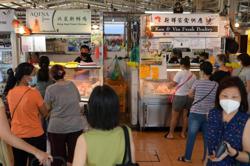